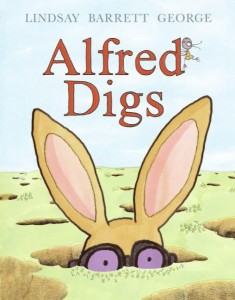 What would you do if your pet ant escaped from her ant farm?

Even if you had promised your Mama to eat your pie, and drink your milk, and stay in your cozy burrow?

Reviews
"Alfred’s not the most obedient of aardvarks, but he may be the cutest. When his pet ant Itty Bitty goes missing, Alfred casts off his mother’s request to stay put while she’s away on an errand. He leaves his cozy burrow at (of course) the very beginning of the dictionary to dig through the other letters in pursuit. Even younger children will have no trouble accepting the unusual shape of Alfred’s universe, nor in following his meandering track as, in George’s clean-lined cartoons, he goes all the way from “B” to “W” before catching up with his errant ant. A spread-filling Woodpecker provides a moment of fright, but then Mama drops in to the rescue amid a shower of loose letters, faces the beautifully rendered bird down, calmly conducts her contrite younglings to the Zoo-and then conducts them back to “A” aboard Zebra’s Zeppelin. Strewn but not crowded with letters, and animals or objects to match, this pleasant excursion through the ABCs is just the ticket for audiences ready to emerge from pre-literacy."—Kirkus Reviews

"Once again this well known author/ illustrator has come through with another winner. Alfred is a young aardvark whose beloved pet is an ant named Itty Bitty. Alfred and his mother live in the dictionary on the “A” page. Like all aardvarks, Alfred loves to dig. When Itty Bitty escapes from her ant farm and heads for a visit to the zoo, Alfred follows by digging through the dictionary all the way to the letter “W.” Here he uses his long and sticky tongue to rescue Itty Bitty from a very hungry woodpecker. Suddenly they hear a noise that gets louder and more frantic until Mama appears and confronts the woodpecker. Since Itty Bitty still wants to go to the zoo, they dig down until they reach the zoo and have a wonderful visit. When it is time to return home, Mr. Zebra gladly flies them out of the dictionary in his beautifully colored blimp back to their home on page “A.” Everyone is exhausted and soon all are in the land of zzzz. The ink-and-watercolor illustrations are vivid and perfectly match the text while giving the story added depth. Children are sure to delight in hearing or reading this charming and clever tale. Purchase is recommended."—Children’s Literature