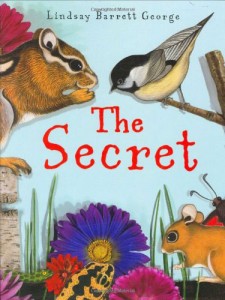 Can you keep a secret?

But what if it is the most exciting, the very best, the most delicious secret that has ever been whispered in your ear?

Reviews
"Mr. Snail has a secret. His mouse friend promises not to tell, and Mr. Snail whispers it into his ear. The mouse heads straight for the beetle and “squeaks” the secret to it. The beetle “pinches” it to the turtle who “grumbles” it to the fish who “swishes” it to the frog. And so, the secret is passed among several animals and insects until the chipmunk finally “chatters” it to the spider who “clicks” it to Miss Snail. She turns around and whispers to Mr. Snail, “I love you, too!” This story is simple but sweet. George’s collages combine natural materials such as flowers and twigs with watercolor cutouts for the creatures. The artwork has an eye-catching, three-dimensional effect…this delightful tale will work well in storytimes and for one-on-one sharing. Children will enjoy identifying the animals and trying to guess Mr. Snail’s big secret."—School Library Journal

"Smoothly combining images of rocks, leaves, flowers, and other natural items with painted figures in bright, realistic, low-relief digital collages, George takes her audience to ground level for a game of pass-the-secret. What Mr. Snail tells mouse is immediately passed on to a beetle, who informs the turtle, thus beginning a long chain of gossip that ends at Miss Snail. The secret, revealed by Miss Snail’s answer, is “I love Miss Snail,” and unlike the usual result of “Telephone,” it plainly isn’t garbled at all on its circuitous route. George keeps her text to a minimum, and uses a different verb for each exchange: “The moth shook it to the bee, / who buzzed it to the caterpillar. / The caterpillar / tickled it to the worm. / The worm / hummed it to the chickadee.” Reminiscent of A Kiss for Little Bear, this offers unusual measures of verbal and visual delights."—Kirkus Reviews