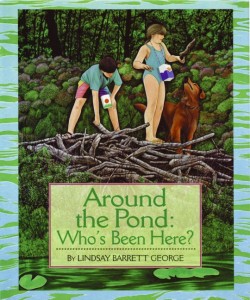 Cammy and William follow an old deer path around the pond in search of blueberries.

But they find a lot more.

Clue after clue tells them what kind of animal has been there before.

Reviews
"An introduction to eight different wild creatures that live near or in ponds. Following the same format she used in In the Woods and In the Snow (both Greenwillow, 1995), George creates a guessing game for two children taking a walk in a natural area. Here, the youngsters set out to pick blueberries for pie, but they are soon distracted by the telltale signs they see and items they find along an old deer path around a pond. With each discovery, they ask “Who’s been here?” Turning the page provides the answer: viewers will find a brilliant gouache painting of the animal, fish, or bird in its natural habitat. There is a brief note on each creature at the end…large detailed paintings and the brief text make this a lovely book to share with children as an introduction to animal life and to tracking."—School Library Journal

"William and Cammy, the siblings who took us through the snow and into the woods in two previous books, are again our guides. This time, we follow them down a path along a pond. A page of text discusses clues left by an unseen animal, ending with the question, “Who’s been here?” The opposite page presents the information in visual form, with the follow-up double-page spread revealing the animal in a beautifully rendered gouache painting. Some clues, such as the children’s discovery of a dam, are obvious. Others, such as “a large, gray feather,” are almost impossible to guess…spectacular lifelike paintings invite repeated examination. Another superb installment in a unique series."—Booklist

"Cammy and her brother set out to pick blueberries, which their mother has promised to bake into a pie. As they walk around the pond, they stop to observe animal tracks and other evidence of animal occupation. When they find a clue, such as a feather stuck to the bark around a hole in a tree, the text asks “Who’s been Here?” Turn the page and the spread reveals the answer in a big, bold, life-like painting-in this case, two baby wood ducks. Kids will learn and have a great time answering the questions. After a few readings, they will shout out the answer before the page is turned."—Children’s Literature