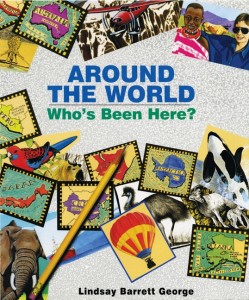 What would you see and hear if you travelled to every corner of the world in search of wildlife?

Here is the answer – and your passport to adventure.

Reviews
"…a teacher embarks on a nine-month around-the-world voyage. In letters to her science class, Miss Lewis discusses highlights of her trip and provides drawings of some of the more significant creatures she comes across, always ending by describing the traces left by a particular animal and the question, “Who’s been here?” For example, she writes from Kenya about seeing “…trees from which the bark had been stripped.” A turn of the page reveals a stunning, double-page gouache painting of an African elephant and her calf…The teacher’s letters are replete with the names of her colleagues and guides, enhancing the air of authenticity, and the small drawings that provide details of her experiences lend texture to the work. Inset maps focus on the part of the world appropriate to each letter and a map on the endpapers shows the teacher’s journey. The final page offers more detailed information about the highlighted animals. All in all, an appealing entry that children will enjoy poring over as they meet some of the world’s wildlife."—School Library Journal

"George offers alert naturalists a chance to go sleuthing around the world, and the results are invigorating. Miss Lewis, a teacher, is off circumnavigating Earth; she corresponds with the students back home, telling of her travels and the creatures she encounters in Peru, Antarctica, Kenya, China, Japan, Australia, Alaska, and an island off the coast of California. She describes the wildlife, mentions particular sites she visits, often throws in an anthropological nugget or two, and then ends with a question that relates to some unusual trace that has been left by an animal—gouges taken out of cliff faces, a tree stripped bare, mysterious snowballs around a hot spring, a trail cut through the stony tundra. The animal is subsequently identified, although readers will not know until the end of the book, where the traces are explained, exactly what has transpired. George doesn’t try to cram every page with information, but is selective, choosing material that distills the unique character of a place. Excellent, highly detailed illustrations (maps) accompany the text."—Kirkus Reviews

"The fourth entry in the popular Who’s Been Here? series features Miss Lewis, teacher and world traveler, as well as a revised format that is appropriate for an audience of slightly older children. Miss Lewis shares her observations of fauna with her class via letters, “photographs,” and paintings as she completes a grant-funded trip around the world in search of indigenous wildlife. The premise works, and the eight double-page spreads of such animals as giant panda, gray kangaroo, and African elephant are superbly rendered to provide sufficient detail and maximum appeal. As in the earlier books, a brief elaboration on each of the highlighted animals is provided on the final page. The connection between scientific observation and resulting discoveries is well made and should encourage readers to take a good look around—wherever they are."—Horn Book Magazine