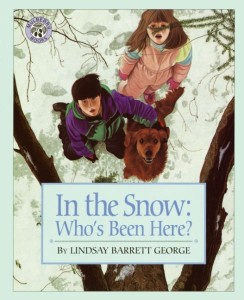 It’s winter in the woods.

Come follow the snow-covered trail with William and Cammy.

Clue after clue tells them what animal has been there and left its trace behind.

Join them for another journey of discovery in this companion book to In the Woods: Who’s Been Here?

Reviews
"A child’s crudely drawn map on the jacket flap shows the snow-covered trail that young William, Cammy, and their dog follow to the sledding hill. Along the way, the children find signs of animal life (tracks, scattered seeds, a nest, gnawed branches, castings, tunnels, etc.), and wonder “Who’s been here?” (Perhaps the happiest finds of all are the doughnuts and hot chocolate left at the end of the trail.) Readers will discover the answers in gloriously detailed, realistic paintings of a ruffed grouse, cardinal, squirrel, porcupine, deer, and other woodland and meadow creatures. The almost tactile illustrations are large and stunning. Children will be interested in the significance of these snowy clues; some may be inspired to look more closely on their own forays into winter landscapes. This companion to In the Woods (Greenwillow, 1994) will work as well with groups as one-on-one."—School Library Journal

"Accurately rendered and dramatically presented, the gouache paintings by Lindsay Barrett George in In the Snow: Who’s Been Here introduce children to a series of common woodland animals: squirrels, a porcupine, a cardinal, chipmunks. Stunning, realistic illustrations of the two children‐and the wildlife they encounter while sledding—are so meticulously detailed that they radiate with an almost tactile quality. On one page, clues are given to the children in the story about the type of animal that “has been here and left its trace behind.” The subsequent double-page spread reveals the animal. The two protagonists’ genuine wonder and respect for the natural world represents a profound message, yet it is simple enough for the youngest listeners to understand."—The New Yorker

"On their way to go sledding, William and his sister, Cammy, discover a variety of animal clues in the snow-covered woods, including tracks near the barberry bushes, fuzzy red balls under a clump of sumac, and broken acorn shells around a hole in the snow. Words in large black type set against a snow-white page describe what the children find and prompt youngsters to guess “Who’s been here?” with the accompanying illustration providing the same information visually. A turn of the page reveals the answer, shown in a spectacular double-page spread of the creature that has left its mark in the snow. Children will enjoy this nature treasure hunt and will lose themselves in the exquisite detail of the photo-realistic illustrations. For a highly entertaining and interactive story time, combine this with George’s equally intriguing In the Woods: Who’s Been Here?."—Booklist

"The illustrations depict winter so well that you can almost feel the crisp cold air as William and Cammy make their way through the woods. While out walking, they find clues pointing to the passage of different animals along the trail. Who could have left claw tracks? How did those fuzzy red balls fall from the sumac tree? Who lives in a nest of leaves? By traces such as these, Cammy and William learn something about each of the eight animals that passed that way before. At the end of the trail, they find the tracings of one last traveler, and its identity may amuse you."—Children’s Literature