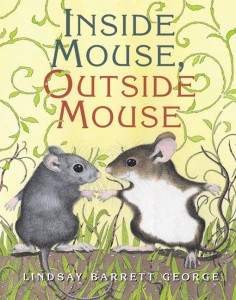 Inside Mouse, Outside Mouse
Written and illustrated by Lindsay Barrett George
Greenwillow Books, 2004
9780060004668
Pennsylvania “One Book Every Young Child” Selection

Once there was an inside mouse and an outside mouse.

One day, they both went on a trip.

They travelled up, down, across, around, through, between, behind, over and under until they finally met in the middle.

Reviews
"A narrator introduces readers to two mice: “Inside my house there is a mouse,/Outside my house there is a mouse.” The inside mouse sleeps in an old-fashioned clock, while the outside mouse snuggles in a tree stump. Line by line, with side-by-side, full-page illustrations, the story unfolds, tracing each mouse’s journey from its home to the window of the house, where the two meet face to face, one looking out and one looking in, and say “Hello.” Gouache paintings in breathtaking colors create zoom-lens views of each of the not-so-different worlds of these two creatures. The pictures are packed with interesting details just waiting to be explored. The simple text, presented in a large typeface at the bottom of the pages, compares and contrasts the animals’ environments and lifestyles. The overall effect is mesmerizing, and the intriguing parallels will capture readers’ imaginations. This creative book makes a great choice for sharing aloud and for independent reading. It’s also an excellent tool for teaching the concept of compare/contrast."—School Library Journal

"George employs her always impressive talent for detail to marvelous effect in this story of two mice whose lives run on parallel tracks-one inside a house, the other outside—until they meet at a window."—Publishers Weekly

"George’s tale of two mice introduces one who sleeps in the clock and runs between socks in a drawer. His outside counterpart lives in a tree stump and races between rocks. The oversize volume is devoted to pointing out the differences in the way the mice live, what they eat, where they hide, and who their enemies are. But this is not a country mouse/city mouse story. Yes, the mice are adorable, but they aren’t humanized—at least in the story itself (they do, however, touch paws on the cover, and one plays a trumpet on the endpapers). Facing pages depict how their existences differ due to where each one lives. This display of difference, though informative, would have become boring, were it not for George’s precisely rendered paintings. The mice frolic against jewel-toned backgrounds so exquisitely detailed that children can spot a tiny bug on a leaf in the background and individual hairs on a cat’s coat. Unusual perspectives also add visual interest."—Booklist

"A house mouse, who sleeps inside a clock, and a field mouse, who sleeps inside a stump, travel corresponding routes to greet each other at either side of the house window. Both the brief text and the full-bleed gouache paintings are parallel, offering the repetition and predictability that is especially appealing to young children…George demonstrates her usual command of her medium; her delicate line perfectly suits the mouse’s-eye view of house and garden (the house mouse passes under the nose of a large dozing dog while the field mouse passes a squirrel, all finely detailed). The occasional striking perspective focuses attention. With its large format, clear illustrations, and the most appealing mice readers have ever seen, this will be popular for both group and individual sharing."—Kirkus Reviews