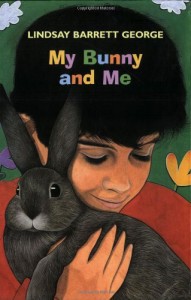 A boy draws a rabbit on a piece of paper.

Then he thinks of all the things he and his rabbit could do together…f only the rabbit were real.

Reviews
"While staring at his childlike rendering of a rabbit, young Luis imagines what would happen if his creation were real. His list of potential activities is simple and modest in scale. It includes the duo looking at their reflections, digging a burrow, climbing a tree, and staring at the night sky. Finally, the boy realizes that his affection for the bunny would in fact require him to set the wild creature free rather than confine him to a human domain. Bold gouache paintings portray a realistically rendered youngster set against a backdrop of naive art. These juxtapositions combined with an inventive use of perspective in some of the frames make for a dynamism and visual interest…"—School Library Journal

"A boy in red pajamas sits at a table and draws a bunny. “If you were real, we could do lots of things together,” he tells the picture. On the following pages, the table disappears and the boy and a now real rabbit play and explore a brightly colored outdoors, depicted in a childlike style, as if drawn by the boy. Exhausted at day’s end, the two snuggle together, and as the boy falls asleep he says, “If you were really real, what I would do is let you go.” The final pages show the rabbit heading off into a field drawn with crayons as the boy, bunny drawing in his pocket, plays soccer on his real lawn. In both the basic, brief text and the wonderfully expressive illustrations, George offers a simple, warm story about blending the real and the imagined in creative play that will send young ones on dream adventures of their own. A good choice for beginning readers…"—Booklist

"What would a young boy do with a pet bunny? Luis ponders these things while admiring a drawing he made of a rabbit. He and his new pet would play and laugh together. Luis would let the rabbit hide in the yard and then have fun looking for it. He would read it stories and at night he would point out the constellations. He would also hold his pet bunny close and give him hugs. Then, Luis decides that if the rabbit really were alive, he would bravely let it go to live in freedom and peace with other rabbits. The illustrations are large and colorful and will surely captivate the attention of young readers."—Children’s Literature